Two-thirds of the globe is covered with water. It is a tremendous resource that the Danish wave energy company, Crestwing, is working to exploit for renewable energy. Crestwing’s owner, Ruth Bloom, is convinced that their wave energy plant, Tordenskiold, is the answer to harnessing the ocean's energy. Gearboxes and couplings from BJ-Gear A/S are installed in the engine room of Tordenskiold.

In Northern Jutland, in the harbour of Frederikshavn, a prototype of Crestwing's wave energy plant, named Tordenskiold, is currently on land. After the first five months of testing, it has now arrived ashore for adjustments before returning to the water for further offshore testing.

Thunderbolt is a wave energy plant developed by Crestwing. After more than 15 years of development, in December 2018, they were finally able to send the wave energy plant offshore to be tested. For five months, the plant has been tested and monitored in relation to its construction, the plant's anchorage and its ability to produce energy. It has passed the first tests very well, and most importantly the tests show that the plant has managed to produce energy - more energy than the installed generator was intended for. Right now, some expected adjustments need to be made, and then the plant is to be brought back to Hirsholmene, where it needs further offshore testing.

A unique way to extract energy from the waves

The wave energy plant is designed and built by Ruth Bloom and her now deceased husband, Henning Pilgaard. The idea behind Tordenskiold is that the plant utilizes the atmospheric pressure to produce energy. The wave energy system is built of two pontoons, which are joined with hinges. The construction causes the system to tilt up and down on the wave as the system is lifted and located at the top of the wave. The atmospheric pressure causes the system to be sucked to the wave and when the wave leaves the system again, the energy is extracted of the wave. There are no other plants that take the energy out of the wave in the same way.

Tordenskiold is 30 meters long and 7.5 meters wide. The plant is meant to be 70x18 meters In the North Sea. The ideal setup is that the plant is as far as the distance between two waves. The plant is designed as a ship, so if it should require maintenance or repairing when at sea, a crew is able to board the plant. This minimizes the need for the plant to be shipped to land once it is launched.

Gearboxes and couplings from BJ-Gear in the engine room

BJ-Gear has supplied gear wheels, gear racks, gearboxes for the system and various clutches including a flexible coupling, a jaw coupling and a pneumatic coupling. 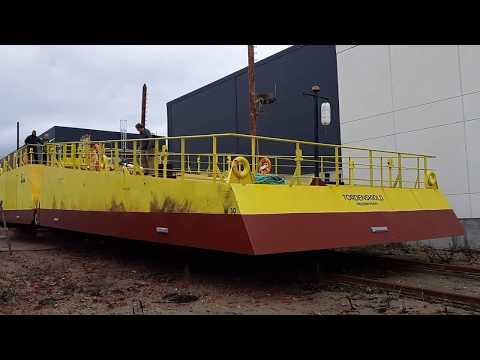