New residents have moved into Urban Village 4000 - 48 new rental homes in Roskilde, Denmark. Urban Village 4000 is an energy-friendly construction consisting of prefabricated lightweight concrete modules built in two blocks of 3 floors, with a lift at each block. Hydro-Con Elevator has supplied the two lifts, which are specially designed for installation at modular and pavilion buildings.

Lifts that are ideal for lightweight constructions

Hydro-Con Elevator, who is specialised in customised lift solutions, has produced these lifts using toothed belts to pull the chair, and they are custom made to be able to stand outside. Hydro-Con Elevator’s lifts are also self-supporting and do not need to be clamped to the building, which is ideal for installation at light constructions.

Customised for outdoor use

To ensure that the outdoor lifts have a long service life, the company has during manufacture taken into account the Danish changing climate. Outside, the lifts are challenged by ice, water, salt, and condensation, among other things, and therefore Hydro-Con Elevator has eliminated the risk of malfunctions caused by water penetration by building all electronics into waterproof plastic boxes. Likewise, all exterior material is galvanised, and powder coated so it can withstand all kinds of weather. Thus, lifts from Hydro-Con Elevator can also be used in e.g. chlorine-containing environments such as swimming pool areas.

Hydro-Con Elevator’s outdoor lifts are also offered with manual door systems. According to Frants Oldenburg, one of the company's directors, 75% of complaints about lifts are due to the doors not working. Based on the principle "Make it simple", Hydro-Con Elevator therefore also offers lifts with doors without a motor, thus eliminating malfunctions and complaints on the doors.

BJ-Gear as an important supplier

Hydro-Con Elevator differs significantly from competitors in the choice of gearboxes, motors, and brakes. Competing lift builders most often use a pre-assembled box with the three components built-in, where the contents are the same for all customers. Unlike the competitors, Hydro-con Elevator base their transmission solutions on the individual customer and take into account what is needed in relation to the optimal use, and then installs the necessary transmission components individually.

For many years, Hydro-Con Elevator used worm gearboxes in their lifts, but as the requirements for energy optimisation have been sharpened, the company has now chosen to use high-efficiency helical bevel gearboxes instead. In addition, helical bevel gearboxes are also quieter than worm gearboxes. This is also an important factor in the choice of gearboxes, as customers demand low-noise lifts - both for indoor and outdoor use.

BJ-Gear A/S supplies all gearboxes, motors, and brakes for Hydro-Con Elevator’s lifts. Director Frants Oldenburg explains that BJ-Gear's ability as an all-round supplier, with the right prices and insightful advices, makes it advantageous to use BJ-Gear as a supplier of all the necessary transmission components.

Are you curious about customised lifts from HYDRO-CON? Follow the link and read more on the company website: 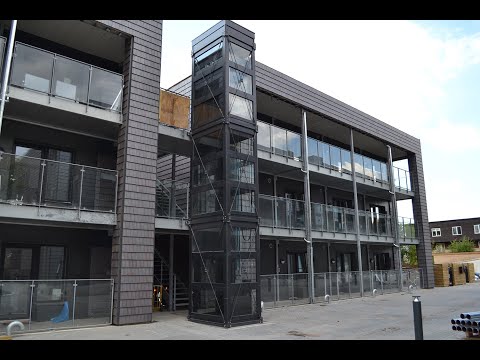