BJ worm gearboxes can be used for many different applications. Recently, BJ-Gear A/S was asked to participate in a tool making project. The project became a very close collaboration between the customer, Global Cable Ltd, and BJ-Gear A/S, where sparring between the knowledge of needs and requirements of the relevant market with knowledge of gear technology and gear solutions gave the ultimate outcome.

The Director of Global Cable Ltd, Jon Elliott, felt there was a lack of safe and quality tools for stripping submarine telecom cables of insulation. Submarine telecom cable has interlayer adhesion, that glues the insulation to the cable core making it very difficult to strip with conventional hand tools. Existing tools, according to Jon Elliott, were difficult and not very safe to use. The stripping of cables was therefore a hard and manual job with the risk of cuts from sharp edges. Jon Elliott has been in this market for more than 25 years, and he was eager to find a solution to make the job easier. He therefore contacted BJ-Gear with his ideas and a request for collaboration.

A cable stripper easy to handle

Jon Elliott presented his requirements and his idea for the experts at BJ-Gear. The requirements to the cable stripper was that it was to be mounted on a battery drill, that it could not be larger than 50 mm in depth, so that it was to be comfortable to have in the hand, and that the weight must be kept to a minimum for use as a hand tool.

The project started with a small model with a series of 52 gearboxes, which was developed to strip submarine telecom cable between 10-33 mm. The requirements were met, the cable stripper worked as intended, and it could therefore be put in production. It is today a great success and makes the work easier for a lot of users. The tool is in use in factories and on-board cable ships involved in the manufacture and installation of undersea telecommunication cables worldwide. Most recently the tool has been sold to offshore windfarm installers for preparation of their fibre optic cables.

The largest cable stripper, which uses a series of 125 gearbox, has a hollow shaft of Ø175 and can therefore strip cables of up to 162 mm in diameter. Stripping of cables – even very large ones - has never been easier. 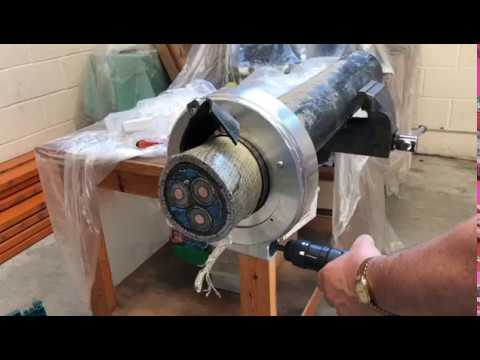